Update: The threat to the town of Wrightwood has been diminished. Winds subsided and firefighters have been conducting firing operations just east of the town. Air ops was just overheard on the scanner telling operations the fire looks “comfortable”.
ABC7.com’s helicopter is having trouble finding live flame to film on the western head of this fire.

All of Wrightwood Now Under Mandatory Evacuation

All of Wrightwood is now under a mandatory evacuation. An evacuation center has been established at Victorville Fairgrounds at 14800 7th Street in Victorville.

For comprehensive coverage of the Sheep Fire check out Rim Of The World. 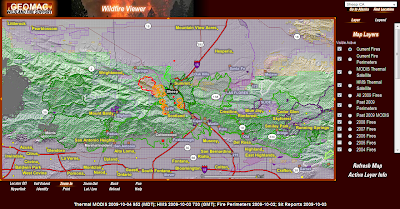