The Curve Fire burned over 20,000 acres in the Angeles National Forest along Highway 39 in September 2002. It appears the Station Fire is destined to meet the old burn as it moves steadily towards the mountain highway. Early on in the Station Fire Commander Dietrich stated his intention to keep the fire west of Highway 39.

I expect Dietrich has people on Highway 39 and has pulled up the old Curve Fire maps to look at old fire roads, breaks and reports. Recall Dietrich’s tactics from the Zaca Fire when he drew the line in the sand on that fire’s advancement at Highway 134 above Ojai. A fierce battle was waged by hundreds of firefighters and numerous aircraft on Highway 134 and the 240,000 acre monster fire died there.

The Fire has burned over 157,000 acres and is just over 50% contained. The latest InciWeb update has a detailed discussion of the fire’s overnight activity and the Station Fire perimeter. That map is posted below. 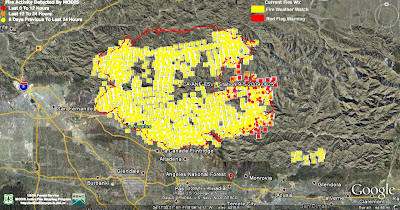