The LA Times reports the Station Fire is approaching Santa Anita Canyon above Sierra Madre. Eighty historic cabins in the Chantry Flats pack station campground are threatened. According to the Times firefighters have been prepping the area for days in anticipation of the fire’s arrival. Pack animals have been relocated and the cabins have been made fire ready.

For perspective I grabbed some views from Google Earth and pinned the Santa Anita Dam and Chantry Flats campground. If you click on the images below you can see just how close the fire is to the canyon and campground. 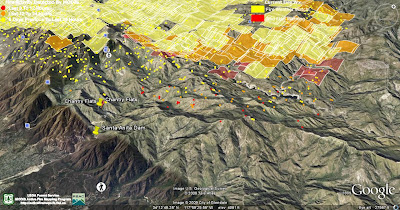 Mt Wilson is the peak just above Santa Anita Canyon. Though firefighters have had days to prepare for the fire their task is no easier than what others have faced elsewhere on the fire. It’s the same fuel, fuel that hasn’t burned in decades. 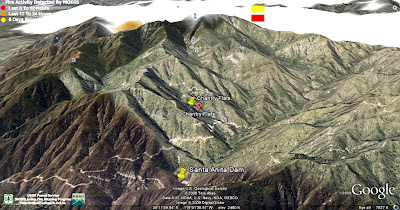 The image below shows how far east the fire has advanced. The eastward path is likely the lowest priority for Commander Dietrich’s team. He already alluded to Highway 39 as the outer boundary of the eastern advance 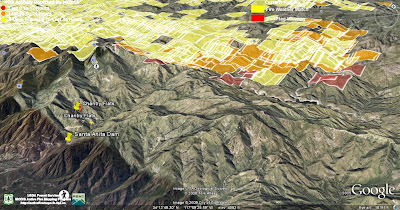 Residents of the San Gabriel Valley should see plenty of flame activity tonight. 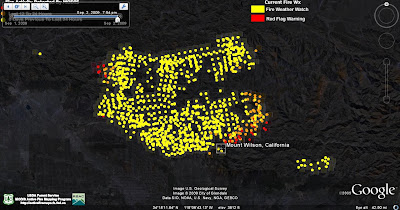 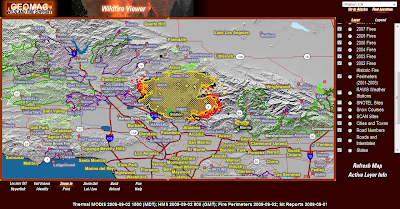 It’s difficult to comprehend this fire stretches from Sylmar to Monrovia, over 21 miles!