Current published acreage for the Station Fire is 42,000. You can see from the GeoMac image below the fire is significantly larger than that now. Although the command team says there will be no change in tactics due to the firefighter deaths I suspect that is not altogether true.

The eastern progression may be allowed to run towards Pearblossom with firefighters laying freeway sized dozers lines at some point in the forest. Dietrich will guard against runs to the west and will try to prevent the fire from doubling back to the south into Sierra Madre. In my opinion this is the biggest danger looking at the map. 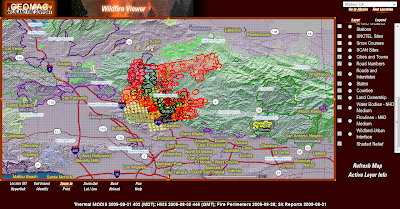 WildlandFire.com has very good coverage of all new and ongoing wildfires in the state.