Station Fire Commander Called Out Of Retirement to Head Effort

The Station Fire incident commander is Mike Dietrich. Dietrich who commanded the efforts on 240,000 acre Zaca fire in 2007 and the 230,000 acre Basin Complex in 2008 has come out of retirement to lead this effort. 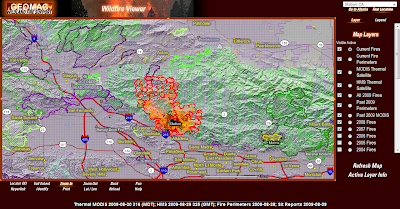 Dietrich and his team take a wider view of incidents of this magnitude. Expect this fire to expand well beyond the current perimeters. His resources will be deployed at the urban-rural interface with emphasis placed on structure protection, as it should be.

Dietrich’s team was criticised by some during the Basin Complex in Big Sur for leaving many homes and one monastery to their own fate but he won’t do that with the eyes of the Los Angeles media on top of the fire.

With resources rightfully focused on structure protection the fire will move north and east as fuel, topography and weather dictate. As the fire moves towards Acton Dietrich’s firefighters will be well positioned to save homes that are savable.

This fire is an odd egg. It’s a Socal monster fire with no wind driving it.

Nearly every major fire in Southern California in recent years has been wind driven. The Station Fire is feeding on drought parched fuel beds that have not burned for fifty years or more.

Where will it go? I expect this acreage to double from here with personnel working on this fire for weeks after containment. The danger is the longer there is open flame the closer we get to October when the Santa Ana winds come howling off the high desert.

As of this morning the Station Fire is now over 35,000 acres with minimal containment. The west head of the fire looks like it wants to merge with the 2008 Marek and Sesnon burns. To the north the fire heads towards the town of Acton in the Santa Clarita Valley. The eastern head of the fire moves unabated deeper into the Angeles National Forest.