The image below represents the approximate fire perimeter. Structures have been reported burned on Locksley lane at Highway 49 as well as on Shale Ridge Lane. Notice the airport in the image below. Air Attack is centering their current suppression efforts near the large water tanks just north of the end of the runway.

There is reason to believe structures to the north of the water tanks are involved. 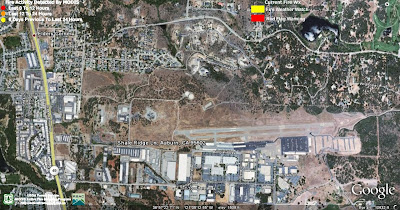