Praise Cal Fire for the quick, professional and effective response to this incident. Let no one doubt this is the most remarkable firefighting force on the planet. Another textbook fire response.

Two outbuildings destroyed, a few thousand acres, no serious injuries. There was some hand to hand combat by Cal Fire and cooperating agency engine crews, dozers, hand crews, helicopter and air tanker pilots that saved dozens of homes in and near Bonny Doon, Davenport and Swanson. 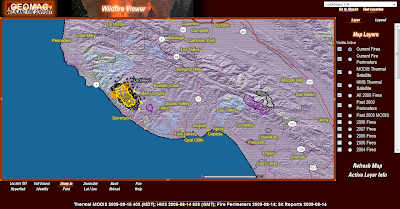 Note: I think it’s funny that Fox News and the other news agencies are blasting this fire all over the airwaves as an ongoing emergency. Better really late than never. The Governor is planning a photo op near the fire lines today as well.

Proximity to the populous S.F Bay Area invited the press to the Lockheed Fire and that made it sexy.

The more interesting fire is the La Brea Fire in the Los Padres National Forest, 150 miles to the south.
The closest population center to the 100,000 acre La Brea Fire is Santa Barbara.
2,000 firefighters are sweating on the lines in the national forest and their contributions should be acknowledged.

Another fire burning out of control with the same proximity to the Bay Area as the Lockheed Fire is the Corral Fire near Livermore. Cal Fire surrounded that runner as well with no media fanfare.
Remarkably in all three fires not one home burned!