Updated Image below; from Noon today

Predicatively the La Brea wildfire is moving now with the prevailing winds. This wind and terrain driven fire will continue to move east and southeast through unburned areas of the San Rafael Wilderness within the Los Padres National Forest.

The advertised acreage is just under 67,000 but figuring infills from firing operations and activity to the east ans S/E and the fire is probably closer to 80,000 acres at the moment.

GeoMac is not real time but it is the closest tool outside observers have.

Notice how the south edge of the fire is bumping along the 2007 Zaca burn. The guys are doing a great job of utilizing the repaired 2007 dozer lines and the Sisquoc Creek/River drainage. 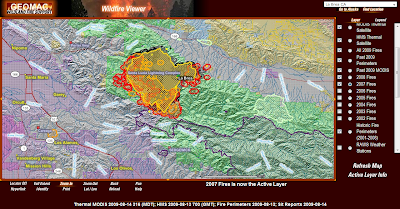 The Pincha-Tulley team is keeping cost figures from the public. In the past this information was passed along to the public through Inciweb. I suggest they want to downplay containment costs as policy now.

For those wondering like me, where are the supertankers? That 20,000 gallon 747 is just sitting out in the Mojave desert like a pretty bridesmaid waiting to get the call.

Updated image, noon today. In the heat detection image below the software indicates numerous spots to the west, east and south. With the afternoon heating and gathering winds these spot fires will challenge firefighters who are already tired. 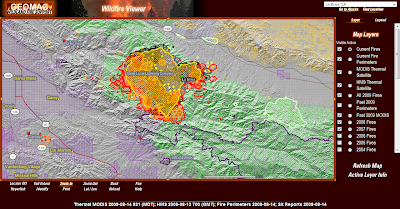