Setting aside my earlier stated opinion on this fire I have to say this is the most impressive fire in California this season. With no real anchor points apparent due to a 360 degree fire front, fighting this budding monster is a moot point at the moment.

The La Brea Fire looks to have taken at least 15,000 acres in less than 24 hours. The area has not been visited by fire (to any extent) in decades. If the fire proceeds south it bumps against the 2007 Zaca burn. North or east and it can bump into the relatively flat Carrizo Plain.

As it moves northeast it will only impact more of the San Rafael Wilderness and the Los Padres National Forest. A run due west could impact the Santa Maria and Olivo (think Neverland) communities. There is no way the city of Santa Maria will see flames in town but the air quality could be serious. Fortunately the prevailing winds are on shore which should help keep the air breathable.

Here is a map showing the affected region. 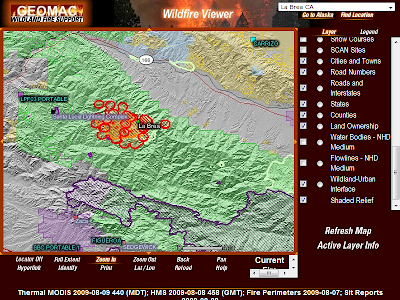 For perspective from a wider view have a look at the radar shot below. The fire can be located by the white dot and smoke lower center in the image.