The Cal Fire air program secured the use of the massive 747 Supertanker for the 2009 fire season according to Rim Of The World.Net. This amazing aircraft, with its 20,000 gallon payload joins Tanker910, the State contracted DC-10 behemoth in Victorville.
Both aircraft will be less than 45 minutes to any spot in Southern California.

Tanker 910 has already proven to be a tremendous asset during its two years of service. The DC-10 carries a 12,000 gallon payload.

If this is not good enough another firefighting industry giant will call Southern California home this season. The Village News reports the Martin Mars JMR3 waterbomber with a 7,200 gallon payload is scheduled to arrive from it’s home base in Vancouver British Columbia this week for positioning at Lake Elsinore. 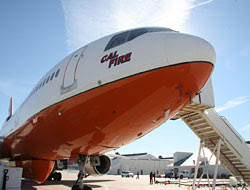 Cal Fire’s commitment to the additional Supertanker while welcomed is also puzzling. In an ordinary year it might be considered a budget buster. With the state essentially broke it begs the question why now?

Perhaps this is posturing by Cal Fire principals, pump the budget before being forced to submit revised numbers. I don’t know. Or maybe after crunching the numbers Cal Fire has decided extensive use of these weapons during initial attack can stop those $20 million campaign fires in their tracks, more than paying for the expensive bombers.

In any case I am all for extensive use of these firefighting weapons. Stomping out fires early for budget considerations is great but I view it from a firefighter safety standpoint.

The longer a campaign is drawn out the more firefighter injuries occur. Just look at the incident 209 reports for campaign fires. Injuries mount as the days wear on. Fatigue invites mistake, the numbers game catches up as acreage mounts and time on scene expands.

No price can be placed on safety.

I look forward to watching how these resources are put in play. I envy the guys and gals on the fire ground where these magnificent aircraft drop their loads. Imagine, between the three aircraft they can leave a trail of 40,000 gallons of water, retardant and gel.

Thanks to Michael E. Dubrasich of The Western Institute for Study of the Environment for the heads up!