The death toll from bushfires in Victoria State have eclipsed all time National marks as authorities find more victims. Four children are among the dead. As well more than 700 homes and likely as many outbuildings have burned. Thousands of livestock have been overrun devastating the lively hood of many ranchers in the region.

NZ Herald.co.nz informs us of the historic nature of this fire tragedy.

“In 1926 fires in the Dandenongs, Gippsland and Warburton in Victoria killed 91 people, 71 died in the state’s “Black Friday” of 1939, and 75 perished in Victoria and South Australia in the Ash Wednesday infernos of 1983.”

The town of Marysville, Northeast of Melbourne is one of several towns that took a direct hit. Many of the dead lived in Marysville and neighboring communities.

Update: Marysville has been leveled. “The Australian” shot these dramatic images of what was Marysville. 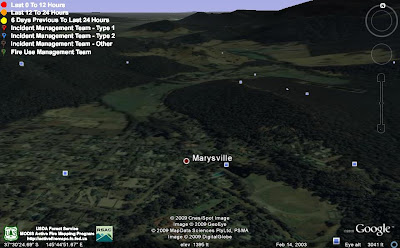 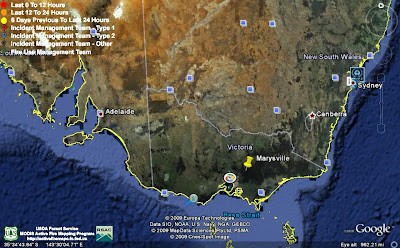 Fires are also burning in New South Wales. Sydney firefighters who already have their hands full can expect worsening conditions as the heat wave makes its way North.