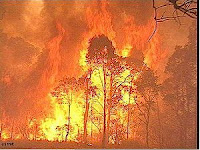 South Australia bushfires have killed 14 people so far in what Victoria Premiere John Brumby describes as “Our worst day in history”.

The CFA has issued severe alerts for no less that a dozen towns in the path of approaching fires. Interestingly their warnings advise citizens to patrol their properties for “ember attacks”, something you never hear in the States.

This fire assault is reminding Australians of Ash Wednesday, February 13, 1983 when 75 people were killed by wildfires.

Uncomfirmed reports indicate more than one town burned to the ground yesterday.