The 3,600 firefighters summoned to the scene will take advantage of today’s calm winds and (somewhat) milder temperatures to douse hot spots and patrol for wayward flames.

Officially 23,700 acres have burned between Corona and Diamond Bar in Orange County. Sixty homes have been destroyed and one hundred homes were damaged. One commercial building was destroyed.

Fire officials estimate the fire is 20% contained but certainly that number is much higher.

A couple being interviewed on CNBC standing in front of their multi-million dollar view home in Yorba Linda told the reporter they were in contact with their insurance agent. They explained how they just got a check for $1,000 from the Red Cross.

I wonder if they know their insurance company provides temporary relocation allowances in the form of a cash advance against their losses. 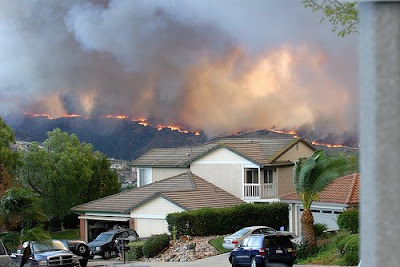