The headline is a bit sensational but this is not an ordinary Santa Ana Wind event. The fire is spooking even veteran news reporters. Homes begin to burn miles apart forcing reporters to wonder if these are spot fires or new starts.

Hot spots include Yorba Linda and parts of Brea though no structures are involved in Brea at the moment. Separate structure are involved in Anaheim Hills including the Cascades Apartments that burned to the ground. No official notice has been offered but it appears the combined fires of the Freeway Complex are zero percent contained. Fire officials have estimated 68 residences have been lost in the complex so far.
This estimate seems low considering the devastation at the Cascades Apartment Community.

Below are some Google Earth captures. The first image is of a home that burned on Hidden Hills in Yorba Linda. KNBC TV4 LA copter pilot Justin Jeager reported this home was more than one mile from any fire activity up wind. Note the little palace across the street with ornate gardens and tennis courts. Quite a contrast to the modest homes claimed overnight in Sylmar. 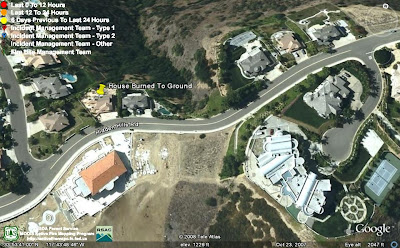 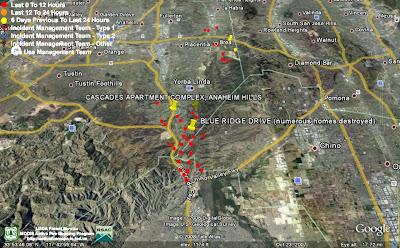 A wider view with the ocean in the top of the image. The fire is very active and winds are still an issue. Fixed wing aircraft have been called back to base for the night. 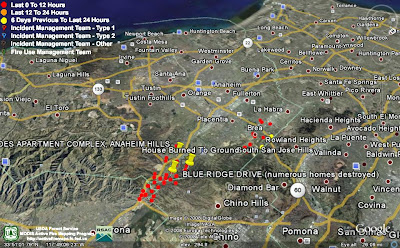 Wider view of the Sayre, Tea and Freeway Fires 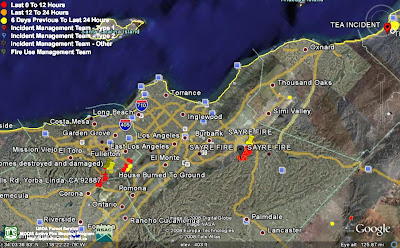