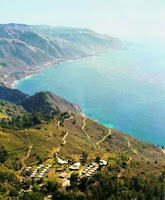 The Chalk Fire that has burned over 16,000 acres between the Plaskett and Eselan on the south Big Sur Coast. Smack in the path is the Camaldoli Hermitage.

The Hermitage is home to 25 monks who live peacefully on the property 1,300 feet above the ocean. The Hermitage has burned once in its 47 year history but this threat will be defended by the U.S. Forest Service and elements of the Big Sur Volunteer Fire Brigade.

Unlike the abandonment of Tassajara during the Basin Complex the monks at the Hermitage will have help if the fire visits the property.

The morning fire report indicates the Chalk Fire is at 16,000 acres and is close to 90% contained.

The fire growth potential is deemed moderate though the difficulty of terrain is described as extreme.
The Chalk Fire command team believes the fire will be contained by October 25.

Big Sur Kate has been on top of this fire (literally) since the fire started September 27. I have relied on her first rate coverage for fire news and local perspective.

This summer has been traumatic for those who live along the Big Sur coast. The Chalk Fire will likely be the last significant fire event of 2008 in northern California. There is a symmetry to the Big Sur fires this summer that has formed as the Hermitage braces for a potential assault.

The Tassajara Zen Center defined more or less the eastern boundary of the 160,000 + acre Basin Complex. The Buddhist monastery was saved by the heroic efforts of five Monks that stayed behind to defend their home.
The Pico Blanco Boy Scout Camp loosely defined the northern boundary of the Basin Complex and was saved by a Forest Service firefighters. The Hermitage sits just below the southern edge of the Basin Complex and will be defended by Chalk Fire firefighters. Buddhists, Catholics and Boy Scouts braced for devastation but were spared.
In total almost 300,000 acres burned in Big Sur and the surrounding Los Padres National Forest and Ventana Wilderness. Numerous homes burned and a community was tested.

Memorial Day to Halloween with fire burning almost continuously in that time.

Lastly, I did not intend to send any personal Christmas cards this year but after looking around the Hermitage website I found out they have a store with art I like. The image below is an example of what they offer. Check out their store here. 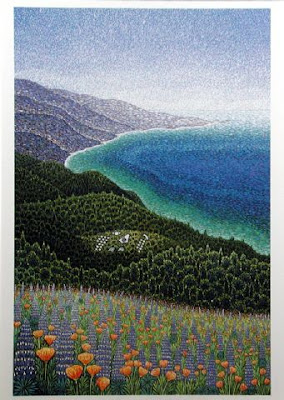 We are our best advocates