Firefighters assembled from all parts of the State will turn their attention to mop up activities now that the Santa Ana winds have abated. High winds forecast for today never materialized giving fire crews a chance to come off the high alert they’ve worked under for the past 48 hours.

Some hot spots are still being worked on the Sesnon Fire but fire commanders have an arsenal of fixed wing aircraft and helicopters at their disposal. I’ll get some final figures on the combined acreage and fire personnel involved at some point. I think the final acreage was somewhere near 10,000 and total personnel near 1,400.

For all the excitement those two figures mirror the numbers for the Chalk Fire in Big Sur last week. The damage was much worse here of course, as two people died and more than 50 homes were destroyed. Fortunately no firefighters were injured during this Santa Ana wind event.

Below is a satellite image taken at the peak of the incident. 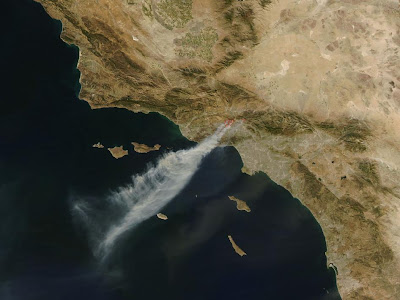