I was just watching a press conference from the command post of the Marek Fire and one of the Chiefs noted in response to a question about the Sesnon Fire that his concern was the fire crossing the Santa Susana gap and running to the Pacific Coast!

Wow, that wasn’t even on my radar.

*Quite a scene is developing on the 118 Freeway near the Porter Ranch area. Drivers are being turned around ON THE FREEWAY as flames beat down on the lanes ahead. CBS2 helicopter pilots are reporting fire helicopters are dropping water on cars on the Freeway! 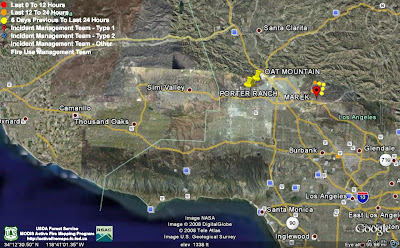