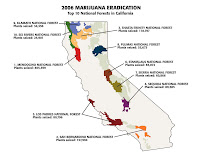 From AP via Breitbart:

“National forests and parks—long popular with Mexican marijuana-growing cartels—have become home to some of the most polluted pockets of wilderness in America because of the toxic chemicals needed to eke lucrative harvests from rocky mountainsides, federal officials said.

The grow sites have taken hold from the West Coast’s Cascade Mountains, as well as on federal lands in Kentucky, Tennessee and West Virginia.

Seven hundred grow sites were discovered on U.S. Forest Service land in California alone in 2007 and 2008—and authorities say the 1,800-square-mile Sequoia National Forest is the hardest hit.

Weed and bug sprays, some long banned in the U.S., have been smuggled to the marijuana farms. Plant growth hormones have been dumped into streams, and the water has then been diverted for miles in PVC pipes.

Rat poison has been sprinkled over the landscape to keep animals away from tender plants. And many sites are strewn with the carcasses of deer and bears poached by workers during the five-month growing season that is now ending….”

The Cascadel Fire that burned a few hundred acres in Madera County last month offers an example of how pot growers present a danger to firefighters. An injured firefighter was airlifted to a Fresno hospital due of injuries sustained fighting the fire.

Officials stated marijuana growers were responsible for starting the fire. Local news did not follow up on this story, maybe they figured no one cares.

Towards the end of the Basin Complex campaign this summer firefighters stumbled upon a plantation with over 45,000 plants. During my time at the academy we were taught that pot growers utilized booby traps. Add toxic fertilizers and poisons to the mix now.

One outfit I would think should care is the Sierra Club. Where are they? Their endowments must run into the multi millions annually and surely they are sitting on tens of millions. Where are they? Surely their founder John Muir would support freeing up some funds. After all the Club got its start in the Yosemite and Sequoia National Parks.

Here is the mission statement of the Sierra Club;

“To explore, enjoy, and protect the wild places of the earth; To practice and promote the responsible use of the earth’s ecosystems and resources; To educate and enlist humanity to protect and restore the quality of the natural and human environment; and to use all lawful means to carry out these objectives.”

Maybe it’s time for environmental groups to step up and offer help to the National Park law enforcement people. Park budgets are stretched and there is little chance things will ever get better on that end.