“La Isla” or the “Isle of Youth” is preparing for the arrival of Hurricane Ike. 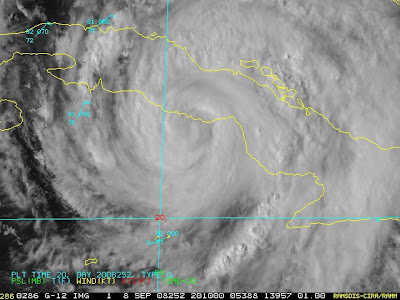 No deaths were reported on La Isla during Gustav according to official and unofficial accounts. This post invited comment from relatives and friends of residents on the island. All reports support evidence the island was ripped apart.

Can any community survive two cat 3 direct hits in a 10 day period? Has this ever happened before?

The Hurricane Center has the storm tracking west and north above La Isla, however if you take a look at the eye in this image it’s bearing west.

Update: Ike passed over the north shore of Juventud after skirting almost the entire south coast of Cuba overnight. As Ike moves away from Cuba later today it will begin a march to US shores. Safe to say Cuba is a mess. It is possible the only undamaged region of the nation is Guantanamo Bay! 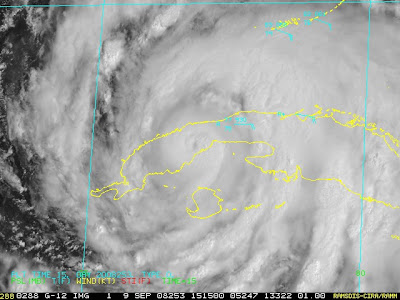