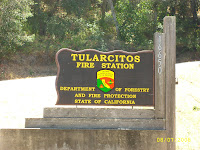 I had to see the country.

Years ago I fought fire on the “front” or ocean side of the Basin Complex burn area.

Twice we brought crews down from Santa Cruz County late in the afternoon and scraped lines around fires burning on million dollar view sites.

Nothing like a beautiful Pacific Ocean sunset as a backdrop while you tie off a polite little burn. Easy money and fun.

A different world exists on the back side of Big Sur.

Yesterday I set out to find the Cachagua Valley, the place where residents were held hostage in their own homes as the Basin Complex Fire worked its way down the backside of the Ventana Wilderness.

Miles south of Carmel Valley I turned off the highway onto the Cachagua Valley Road. The Tularcitos CalFire station sign is about a half mile up the road. No station could be seen and a closed metal gate kept me from getting a look at the grounds. I’ve spent time at a number of Cal Fire /CDF stations and like to see how the stations stack up. This one is hidden from view.

So up the windy, narrow road up to a summit where I could finally pull over and take a look at charred peaks in the distance.

When God built the Ventana Wilderness he put all his leftover steep slopes and canyons behind Big Sur. 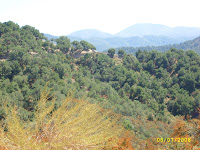 He also covered the steep canyons with vegetation so thick you can’t walk through it. Dare to try you are greeted by poison oak, dead and dying varieties of brush, live and dead oak trees choking varieties of conifers doing their best to make a life surrounded by their less polite neighbors.

My first thought was how did they ever put this fire out.

I descended into Cachagua Valley. Four or more miles of downhill at 10 to 20 miles per hour on the 1 1/2 lane road and I’m on the valley floor. It’s not a valley really, it’s a road between mountains. It looks different from overhead views on Google Earth. 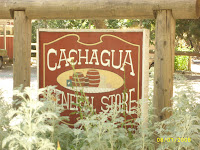 Sitting on the porch of the Cachagua General Store was a gray bearded man reading. I decided not to interrupt his peace with a bunch of questions. I took a good look around until it was time to crawl back out of the valley.

During the Basin Complex fire I followed the saga of the residents of this valley. To say they were treated poorly would be kind to local law enforcement. I’ll never understand why the residents were treated as they were by the Monterey County Sheriff but I did gain a little insight as I drove around the area.

Some places are primed to burn. Because of geography, topography and meteorology some places are fire disasters in waiting. This little valley is such a place.
It’s dry, and sits at the base of steep faced mountains. There is nowhere to defend an approaching fire from. Even the main road is covered by tree limbs. If you attempted to fire out from the Cachagua Valley road the fire would quickly be on both sides of the highway.

Undoubtedly Basin commanders running the east side had detailed discussions about the foreseeable threat to the little valley and concluded the place had to be evacuated. Tactics chosen to persuade the residents were heavy handed and wrong. There is no dispute about this.

My “after the fact” opinion is, if the fire would have moved into the Cachagua Valley people would have died.

Residents who prepare their properties by clearing vegetation, wrapping and have gel on hand can make a case to stay and defend in most cases. The majority of Cachagua homesteads I saw from the road yesterday did not fall into this category. Many of the properties I saw were dangerous fire traps. Firefighters would compromise their own safety to rescue residents in non defensible dwellings and that is the real problem.

Readers of this blog might sense a bit of hypocrisy, after all I have blasted the Basin Command for not helping the residents of Tassajara farther up canyon.

Two different scenarios. The monks at Tassajara had a defensible space and sprinklers installed. The compound had survived a direct fire assault years earlier. Weeks before Basin firefighters drew up structure protection plans for Tassajara. The plans were not put in action and five monks were left to do their best.

In addition Tassajara is one compound, not separate properties spread about. Wildfire burning through a narrow valley with residents sheltering in place is a nightmare scenario.

Once I got back on the Carmel Valley Road I noticed all the signs thanking firefighters tacked and nailed on telephone poles every couple of miles. I liked one in particular posted on a pole in the town of Carmel Valley. 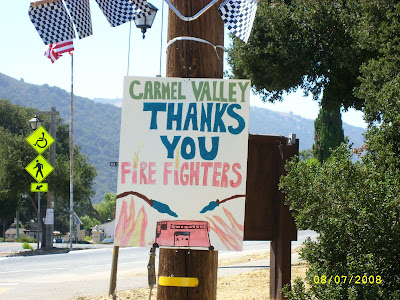 I saw no such signs in Cachagua. I think the sentiment is misplaced. An outstanding firefighting effort waged miles away saved their community.

Coronavirus: What needs to be known about a pandemic