The midday 209 is much the same as the ICS-209 filed at midnight. One new injury is reported bringing the total to 16. The fire is now 45% contained and 4,496 fire personnel are on assigned to the incident. The acreage is reported at 33,705.

This is a logistical challenge for Mariposa considering the town’s population is under 1,500. Mariposa has one main street, Highway 140. It’s situated much like Highway 49 neighbor Oakhurst, the other gateway city to Yosemite where Highway 41 serves as “Main Street”. A rough guess is 700 vehicles are part of the firefighting effort.

I hope someone is getting pictures.

The map below is the Telegraph Fire perimeter tonight using a Google Earth overlay from Forest Service Active Mapping Service. 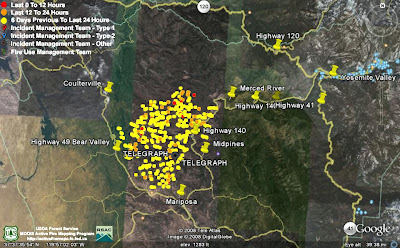 Local Mariposan’s were kind enough to inform inquiring commenters from the previous post where the Burma Grade Road was located. The grade has been referred to by Telegraph Fire personnel from dozer operators to air attack pilots for days now but the road is not named on any maps.

We can see now the importance of this road. It’s a key crossing point of the Merced River that allows resources to access fire grounds on the north bank above the river and beyond.

Another key geographic feature is Black Mountain, also unnamed on available maps. Even tanker pilots have asked for clarification from air attack as to which peak is “Black Mountain”. 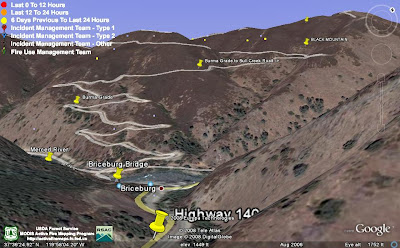 Update: Again thanks to readers we now know the exact location of Black Mountain in relation to the “Burma Grade” road. For those who want to see a topographic map click here. My experience was it takes some time to load. 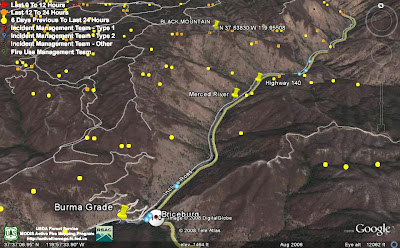 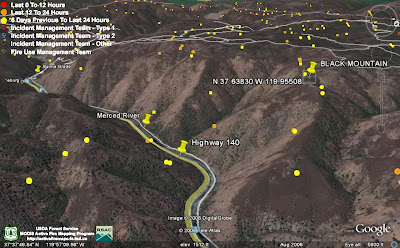