Threat Eases as Telegraph Slows To a Crawl

Updated totals for the Telegraph Fire: 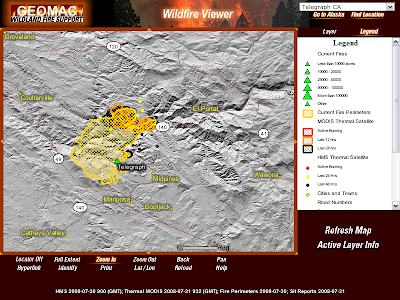 Today’s observed fire behavior:
“North end of the fire is a running surface fire with occasional single tree torching and short range spotting. The remainder of the incident is experiencing moderate fire behavior.

Significant events today:
Active fire behavior is primarily in the northern and eastern flanks of the fire. Hwy 140 to Yosemite National Park was restricted for a period of time yesterday; CHP will be escorting traffic through one lane only when air operations is not working in the area. Logistical support is now available at Kassabaum Spike Camp. On 7/30/08 at 0700 operational briefings will be held at both camps. The northern portion of the fire is mow in fuel model 10. The incident is now operating in an Area Command (Hodson), with north and south operational areas. ICT 6 will command the north area and ICT 8 will command the south area. The Merced River will be the operational area break. Fire suppression repair has begun. Some residents in Div A, B, and S were allowed to renter this evening

Actions planned for next operational period:
Keep the fire east of Highway 49, north and west of Highway 140 and south of Highway 120. Dozer and hand line will dominate suppression efforts due to the extreme topography and fuels. Air support will be critical in holding efforts. No significant demobilization is planned for 7/31; however plans are in place to demob Type 1 Engines starting on 8/1. Resource orders have be placed to facilitate the demobilization plan. Fire activity may alter this plan”