The afternoon incident 209 is out and not much has changed since the previous filing posted at midnight.

At the moment the Martin Mars air tanker AND Tanker 910 are lining up to make drops over the fire. All three heavy air tankers parked overnight at Fresno are working the fire as well as 2 MAFFS C-130’s waiting in the queue.

Anyone close to the fire is witnessing a quite a show! 13 helicopters and 12 fixed wing aircraft are working the fire today. 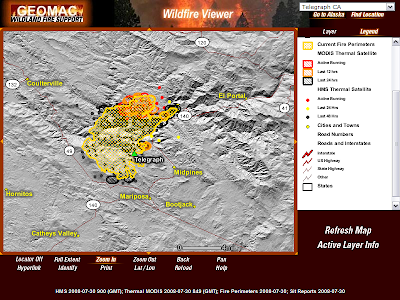 Given the current constraints, when will the chosen management strategy succeed?
Likely in the southern area. Still very difficult in the northern area

Remarks:
The communities of Coulterville, Midpines, and Greeley Hill are threatened. El Portal, and Yosemite National Park may be threatened. The fire will continue to cause partial or complete restrictions of Hwy 140 leading to the main entrance to Yosemite National Park. An evacuation center has been established at the Mariposa Elementary School. Kassabaum Spike Camp is now operational. Preliminary damage inspection was conducted by Mariposa County; the incident will continue damage inspection over the next several days.

Significant events today:
Active fire behavior is primarily in the northern and eastern flanks of the fire. Hwy 140 to Yosemite National Park was restricted for a period of time yesterday; CHP will be escorting traffic through one lane only when air operations is not working in the area. There was a town hall meeting conducted by command staff in El Portal to inform residents on the current fire status, over a two hundred residents attended. Logistical support is now available at Kassabaum Spike Camp. On 7/30/08 at 0700 operational briefings will be held at both Base Camp and at Kassabaum Spike Camp. Today the northern portion of the fire transitioned from a fuel model 6 to a fuel model 10. The will be transitioning into an area command at 1200. The incident will have a North operations area (ICT 6) and a South operations area (ICT8).

Over the next 12 hours the fire will continue to grow in Branches III.”

Amid Dry Winter, California Worries About Drought and Wildfires