“A lack of resources is not allowing offensive tactics to be implemented. This Complex has potential to become a mega fire”

The fires are under staffed, in some cases divisions are not staffed at all. 1,950 firefighters are assigned to the combined fires within the SHU Complex. The fire ground has experienced 100 degree plus temperatures for days with very little relative humidity recovery in the early morning hours. 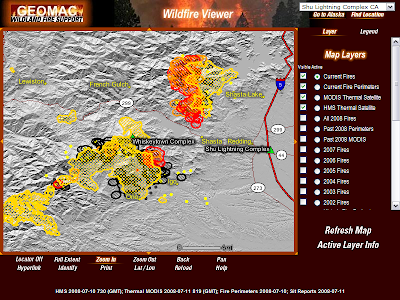 The Motion and Moon Fires are bearing down on Shasta City on two fronts. The evening report places the community of Shasta on the watch list in the next 24 hour operational period. 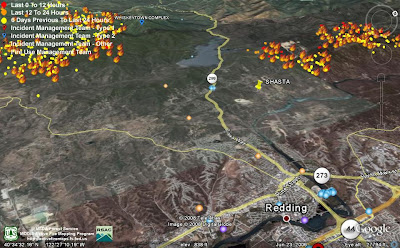 Projected movements and spread for the next 12 hours:
The Motion fire is experiencing long range spotting and has escaped initial control lines. The fire’s progress continues west
The Moon fire continues to move to the west-northwest as well as some slop over on the northeast flanks. The Zogg Mine Road and Muletown Road areas are under mandatory and precautionary evacuations respectively.

Strong north and variable winds have aided in fire movement during this reporting period….. …..This fire has the potential for major structure loss and large growth. The Motion fire is threatening the Whisky Creek Campground and Day Use areas along with structures scattered through the area. Highway 299 is closed in both directions due to the Motion fire. The Moon fire continues to move to the south and east.
The town of Ono and surrounding communities remains a structure threat with evacuations in place. Structures in the Zogg Mine Road and Rainbow Lake resort area are being protected as well as under a mandatory evacuation. A lack of resources is not allowing offensive tactics to be implemented. This Complex has potential to become a mega fire and exceed $50 million dollars.

More:
Fire behavior is considered extreme. Significant fire growth is taking place on both the Motion and Moon fires. A Red Flag Warning is in place for this incident with an updated time of 1800 hrs. on Friday 7/11. Fuel moistures are at record low levels with fuel beds being very receptive to ignition. Both fires are exhibiting both long range and short range spotting. Significant amount of open fireline still exists, fires are crossing control lines due to strong winds, high temperatures, single digit RH values and roll out on steep terrain.