The good news, the Tassajara Hot Springs/Zen Center survived a full assault of the Basin Complex Fire flames. The Center posted the good news on their site late this afternoon. The four men and one woman who stayed at the Zen Center beat back flames and saved the compound. Surely the place would have burned to the ground without their efforts.

The bad news is the fire is running wild to the east, northeast and south guided by low humidity and high temperatures. The fire has now burned 100,000 acres and is 40% contained. Combined the Basin Complex and Indians Fire have claimed 183,000 acres, more acreage than the 178,000 acres burned in the Marble Cone Fire in 1977.

The Indians/Basin fires are now the sixth largest wildfire in California history. Fire authorities may count the two fires as separate events but they have merged and there is active burning within both perimeters. Basin Complex Fire command is fighting it as one fire. The Indians Fire incident base was closed and the two camps joined forces earlier in the week. Currently the 5th largest is the Witch Fire (198,000 acres 2007). 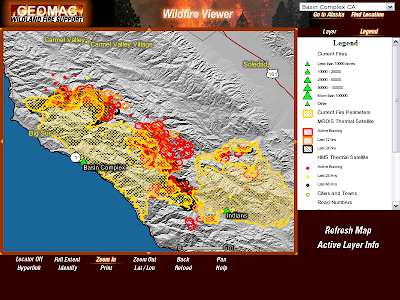 2,140 firefighters and support staff are assigned to the fire, down another 50 or so from this morning’s report. Six fixed wing aircraft and 13 helicopters are fighting the Basin Complex from overhead.

The next 24 hours:
West Zone: “Fire is expected to spread north toward Blue Rock Ridge/Devils Peak and east toward Elephant Peak. East Zone: Fire spread to east toward Tassajara Rd and Arroyo Seco. Spread to southwest toward Naciamento-Fergusson Road.”

Commander Deitrich is still maintaining a final acreage estimate for the Basin Complex at 170,000. The combined acreage of the Indians/Basin Fire could challenge the largest fire in State history. The Cedar Fire holds that spot at 273,200 acres.

Coronavirus: What needs to be known about a pandemic