The Google Earth map represents a view of the Piute Fire from the town of Bodfish looking south. The fire is advancing towards the town. The GeoMAC image below shows the Piute Fire current hot spots indicated in red.

The direction of the fire is completely dependent on the wind over the next few days. Fire command indicates this morning, as they have maintained since the fire started on June 28 resources are inadequate to fight this fire properly.

The Piute Fire has grown to 30,000 acres and is 22% contained. Indications are the fire will grow to the north for at least the next day. 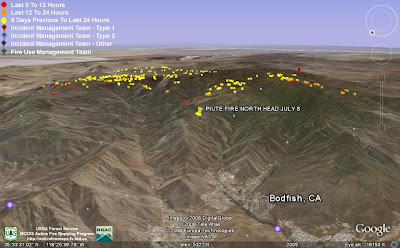 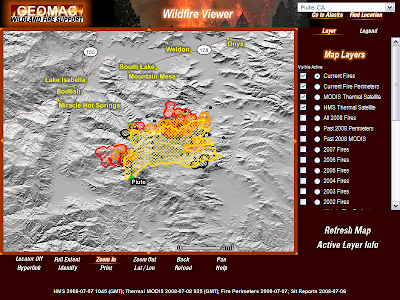 Here is some of the narrative from the morning fire report. Note the command team expects winds to moderate in the next 48 hours. That is good news for the communities down canyon.

“The fire was active on the northern and western perimeters due to strong southeasterly winds. Control lines on the western perimeter were lost and the fire continues to move west and north. The fire burned through the Red Mountain area. An assessment is being made of structures lost. The community of Havilah was issued an evacuation warning. Crews completed indirect dozer and handline in the Kelso Valley area to prevent the fire from moving on to private land. Type 1 helicopters are very effective in reducing the spread into these communities until ground resources can reach critical areas. Lack of overhead positions continue to hamper suppression efforts. Lack of Division Supervisors is creating span of control issues. One area of the southern perimeter was compromised with active fire over the control lines. Crews continue to attempt to keep the fire north of the Piute Mountain Road. Steep terrain is making control efforts difficult on the western and northern portion of the fire. Work on a contingency line on the northern perimeter was begun with the use of hand crews and dozers. These resources were pulled off control lines due to active fire behavior. Several IHC crews are timing out which will impact the completion of the contingency line. Helicopter bucket drops are crucial in these areas to allow ground resources sufficient time for control actions.

12 hours: Fire will continue to spread North and West.

24 hours: Fire will continue to spread North and West.

48 hours: Due to an expected change in wind speed, the spread to the west should slow down with some growth continuing to the north.