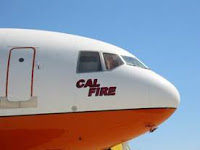 The GeoMAC image below shows the Basin Fire freshening as afternoon breezes pick up. This is an incredibly difficult fire to suppress. Resources are spread between the (still) populated Big Sur valley and the Ventana Wilderness and State Parks to the north, east and south. Only the now slowing Gap Fire has a higher priority of the hundreds of fires still burning statewide.

This is why we see the Cal Fire’s DC-10 Supertanker, Tanker 910 over the fire now. Local chatter indicates the giant aircraft is working the active north head of the fire.
This makes sense considering the wind changes predicted over the next two days. If as predicted the winds shift from northwest to a more easterly direction the fire could hook back towards the base camp situated at Molera State Park.

That scenario seems improbable at the moment but Deitrich does not want to suffer the humiliation of being overrun like the Cascade Fire base was last year. (that video is permanently embedded on the sidebar to the right)

We’ll see some pictures of Tanker 910 over the fire by tonight though I won’t poach any. Some bloggers do and that’s their problem. I don’t need Getty or AP lawyers at my doorstep as badly as I want the pics. I’ll link. 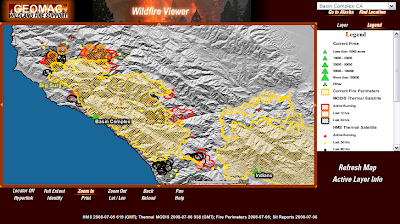 You can get an idea of the wind and how it affects the Basin Complex live at RAMSDIS.

Moving down the map to the southeast head of the fire it appears the Basin will tie in to the cold Indians Fire line by tomorrow or Tuesday. At that point the combined acreage will move over 160,000 acres. Even then containment will be minimal.

Someone on one of the local blogs mentioned that 7,000 firefighters were assigned to the 178,000 acre Marble Cone Fire in 1978. The Basin Complex has approximately 2,500 on scene but this is a recent figure. Deitrich and crew were working with several hundred firefighters for most of the first two weeks as the fire became established.

Just keeping the flames out of Big Sur valley has been a minor miracle. The fact only 22 homes have burned so far is a minor miracle. Certainly a testament to good firefighting.
I hope someone nominates Deitrich and his team for recognition. Normally the Forest Service rotates ICS teams after two weeks. I hope they keep Deitrich on as long as possible.
It’s his baby and he has a plan.

Man dies after falling into chemical tank in Ohio