With headline grabbing fires like the Basin Complex in Big Sur and the Gap Fire in Santa Barbara less “glamorous” fires like the Piute fall off the media radar.

1,261 firefighters are working day and night on the 20,000 acre blaze burning south of Lake Isabella in Kern County. 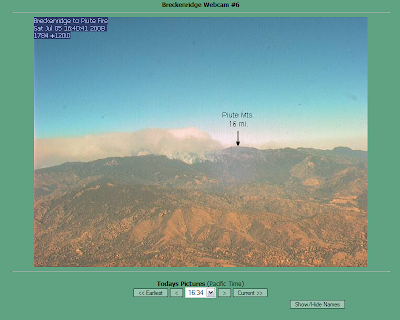 The Piute Fire commanders have been hampered by the statewide strain on resources since the fire broke out June 28. I’ve watched this one via webcam since the start and it looks like a scene out of the movie Groundhog Day. The Piute Mountains all seem to look the same.

Here is some of the narrative from the ICS-209 filed this morning;

“Fire continues to move actively toward the east threatening the Kelso Valley area. Perimeter slopover occurred on the southeast corner of the fire along the Piute Mountain Road. Crews were able to secure the slopover with the aid of aerial retardant. The fire continues to move down slope on the western perimeter toward residences in the Thompson Canyon and Red Mountain area. Plans for a contingency line in the southwestern corner of the fire are being made. Type 1 helicopters are very effective in reducing the spread into these communities until ground resources can reach critical areas. Lack of overhead positions continue to hamper suppression efforts. Lack of Division Supervisors is creating span of control issues. Resources continue to hold and construct line on the southern perimeter to protect the community of Claraville. Steep terrain is making control efforts difficult on the western and northern portion of the fire. Helicopter bucket drops are crucial in these areas to allow ground resources sufficient time for control actions.”

” Dominant fire spread continues to be to the east toward a fuels condition change that will allow for more effective control operations. This will continue for the next 72 hours”

Values at Risk: include communities, critical infrastructure, natural and cultural resources in 12, 24, 48 and 72 hour time frames: