Indians Fire (60,000 acres 71% contained) management (joint, headed by CIIMT2 (Molumby, IC) bucked convention and conducted a firing operation on the north side of the fire. You can see in the image below (indicated in red) where they burned today.
The Indians Fire ICS-209 report filed tonight indicates the firing operation was carried out in the face of 16 mph winds from the east, towards the Basin Fire less than three miles downwind. 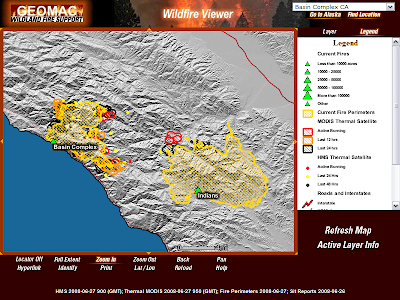 I’ve followed this fire more closely than others burning in the state because it is close to my place and I sensed early on this fire could be a candidate for mismanagement. The $36,000,000 price tag to date and hoarding of personnel, when others begged for resources has not altered my suspicions. Maybe they don’t realize how close they are to the Basin Complex? It almost appears as though they were persuading their fire to move east.

If this is their long range plan then it means they intend for the two fires to merge. The Basin Fire (26,000 acres 3% contained) hints so in their June 27 pm ICS-209.

If the fires meet in the middle on their own I have no problem. If the fires are being directed to meet I suggest the forest is a victim of mismanagement.

The Molumby crew has been consistent from the beginning his fire would be an 80,000 plus acre event. He’ll be dead on if he pushes his fire into the Basin Fire. Dead on for his Indians Fire contribution. A combined Basin/Indians perimeter could easily combine to take out 125,000 acres.
The Ventana Wilderness deserves better than this.
.