The latest GeoMAC image captured at 1:00pm today shows the fire spotting off the south flank of the Basin Complex Fire. We know from the morning ICS-209 that Incident Commander Dietrich is not keen on putting firefighters inside the perimeter for the most part. There is not much to be gained and very much to be lost by placing his limited resources out in front this beast. As it stands his fire and the Indians Fire are destined to merge. No one needs to get hurt trying to stop it. 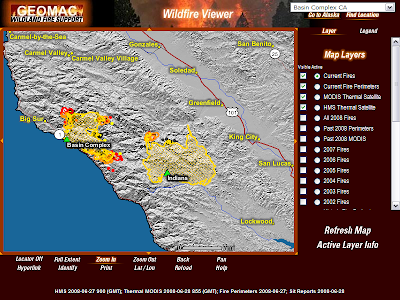 If you look at the path the Basins Complex is taking you can make a case the south flank could run to Nacimiento–Fergusson Road. In this case firefighters could then tie the Basin Complex to the burned areas of the Indians to the east and the Pacific Ocean to the west.

The north flank of the fire should be helped by prevailing N/W winds once they return. The eastern head of the Basin Complex looks like the headache for fire command.

The morning report projected the final size at 170,000 acres. Most of this acreage has to come from acreage gained on its journey east. In order to get to 170,000 acres you have to look out as far as the lower Carmel Valley.

It seems almost inconceivable at the moment to suggest the fire will travel that far but I can’t see how else they can get to 170K acres. Residents of lower Carmel Valley will get early clues if they begin seeing bulldozers unloading on the Valley floor to begin constructing or fortifying trails along the first line of ridges running the length of lower Carmel Valley.

These are only my back of the napkin thoughts. For a formal narrative read Sur Coast updates.

Doing the Job From the Sidelines