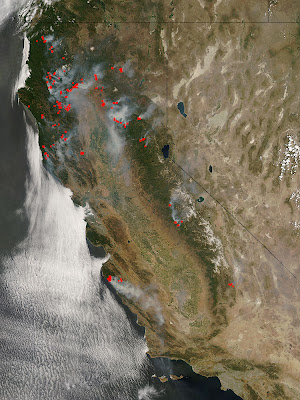 “A heat wave and windy weather plagued firefighters in California in mid-June 2008 as they worked to contain hundreds of fires across the state. Many of the fires were triggered by lightning on Friday, June 20. This natural-color image from the Moderate Resolution Imaging Spectroradiometer (MODIS) on NASA’s Aqua satellite on Monday, June 23, shows places where the sensor detected actively burning fires (red outlines). Fires appear most numerous in Northern California. The Northern region of California has experienced record low levels of rainfall this spring, leaving dry vegetation in the area. This in conjunction with windy weather has made firefighting efforts difficult.”