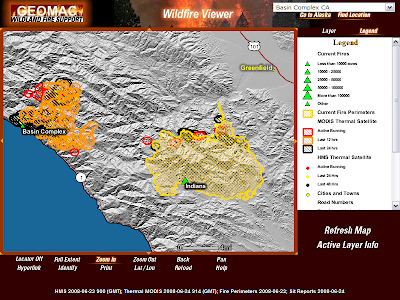 It appears inevitable the Gallery Fire, now known as the Basin Complex will merge with the Indians Fire.

The Indians Fire has burned 58,000 acres and is at 71% containment. The fire has been burning since June 8. Two thousand firefighters are assigned to the Indians Fire.

By comparison 580 firefighters are assigned to the 13,500 acre Basin Complex. Indians Fire command is sharing some resources and, “preparing to assist the Basin Complex with strategic planning and implementation as the need arises“.

“Mandatory evacuation notices were issued late Tuesday afternoon for residents in the Arroyo Seco area as the Indians Fire continued to move north toward homes. Residents on Arroyo Seco Road from Carmel Valley Road to the Arroyo Seco Campgrounds have been ordered to evacuate the area.”

This supports evidence seen on the map above that the Indians Fire is still far from full containment. The map below points to Tassajara Hot Springs, directly between the Basin Complex and Indians Fire.
The combined fires could easily total 125,000 acres or more.
Sixteen homes have been consumed by the Gallery Fire/Basin Complex. Two homes and fourteen outbuildings have been destroyed by the Indians Fire.