Recall the Zaca Fire when the fire command lost it after nearly pinching it off at 35,000 acres? As I recall it was the same ICS team, CIIMT2 in control when the fire squeezed through a small pass and exploded to the S/E claiming another 200,000 acres before it was stopped in Ventura County.

So far 9 firefighters have been injured on the Indians Fire,at least 3 of the injuries were the result of a burnover that required hospitalization of at least one firefighter. 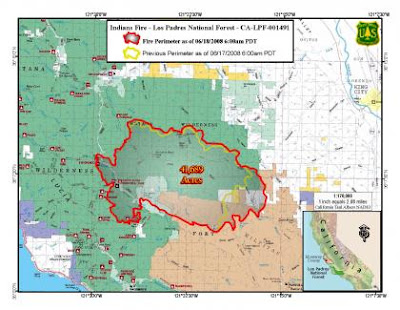 Now that the fire is firmly established in a Wilderness designated area don’t look for this to be a priority. Like the Zaca, and countless other such fires including the Marble-Cone Fire that burned 177,000 acres in 1977 (only miles from the Indians Fire scene) the Forest Service will milk this baby for awhile.

Example; from the ICS-209 tonight

Given the current constraints, when will the chosen management strategy succeed?

“A projected date will be provided upon the completion of long term strategy planning.”

Draw your own conclusions. Follow the Indians Fire at Inciweb.

More information from the Incident 209 (via email and NIFC pdf)

*The incident remains under unified command with CIIMT2 (Molumby, IC), Cal Fire (Hutchinson, IC), and Fort Hunter Liggett (Crum, IC). Long range strategic plans continue to be developed. Perimeter calculations are based on the primary control line. The correction to the number of residences destroyed in blk. 25 is due further assessment performed during todays operational period.

Actions planned for next operational period: 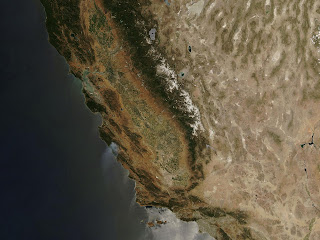