Dubai Fire; When Money is No Object

I admit a fascination with Dubai. Over the top architecture, man made island cities and a place where Chevy Corvettes arrive at an emergency scenes before fire suppression apparatus.

Yes it’s true and you can read about it here, where you will also read about the fleet of Hummers they operate;

“Brigadier Rashid Thani Al Matroushi, Director of Dubai Civil Defence, said the civil defence will soon start using a customised Corvette car to attend to fires quickly, to prevent them spreading.He said the car is a small, light and fast car which can beat traffic and contains highly-effective firefighting and prevention systems in addition to rescue equipment in cases where people are trapped in cars.Equipment in the car includes a portable fire extinguisher, hydraulic equipment, firefighting equipment and first aid equipment.Brigadier Al Matroushi who suggested the idea of developing a sports car and followed up its development daily, said one of the reasons behind a fire getting worse was the distance between civil defence centres and accident locations.” 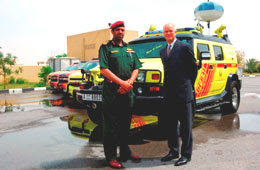 …and they have numerous of each!

The rationale is superb. A couple of first responders race to the scene to size up or initiate a rescue. Think about it, how many times have you arrived at a fire scene and thought if only you were a few minutes faster?

Fire service in Dubai is facilitated by the Dubai Civil Defence, under the Ministry of Interior. The DCB website reveals a surprising few fire stations (8) for a city of almost 1.5 million with a projected annual growth rate of 6%.

Dubai World, (the offshore island city) and other water front properties have their own emergency and fire service, Dubai World Fire Department who also work closely with Dubai Civil Defence under a mutual aid arrangement.

The city suffers tragedy like every other major city. The Oz expatriate authors of Dubai Thoughts blog offered a heroes tribute to two fallen firefighters.

“Dubai: Two firefighters, including an Emirati officer, died while battling a fire that broke out in a building under construction at Palm Jumeirah on Friday, Gulf News has learnt.

According to official sources, the firefighters died of asphyxia and their bodies were recovered from the gutted building early on Saturday. Thick smoke engulfed the seven-storey building and hampered the search for the bodies till the morning, officials said.”