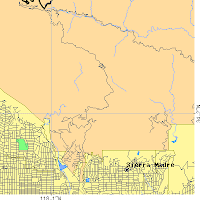 Hundreds of homeowners in the community of Sierra Madre have been ordered out as a 300+ acre wildfire made an early morning break for their community. Information from AP (via Google News) reports;

“More than 200 firefighters were aided by a dozen engines, three water tankers and three helicopters as they took on the blaze, Weaver said. She said more air support was expected later Sunday morning.

“They plan on hitting this thing at full force as soon as dawn hits,” Weaver said.

Flames outlined steep ridges about a mile above Sierra Madre, a community of about 11,000 at the foothills of the San Gabriel Mountains that is popular with artists.”

Opinion: While the weather is expected to approach the century mark later today winds will be light. Absent a significant wind event the combined resources available to the command team should prevent widespread property loss.

Follow the Santa Anita Fire near Chantry Flats at;