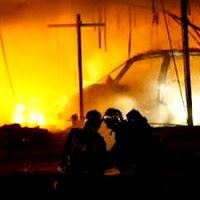 The other day I pointed to the subject of food hoarding. Since then I’m reading and hearing much more about the issue. Think about it, if food becomes scarce or even a perception of scarcity catches hold the resultant panic could cause rioting that would place first responders between rioter and burning buildings.

It’s at a tipping point in the Philippines, Malaysia and Indonesia. Philippine farmers caught hoarding could face life in prison, while Malaysian stores have been stripped of palm oil.

The subject in Asia is the availability of rice and according to Reuters Thailand, producer of 1/3 of the world supply of rice says they have enough rice to meet export demand, for now. Indonesia has curbed exporting rice to meet demands of the own and to stave off “social unrest”.
Today Brazil halted rice exports.

“The surging price of fuel and food, which some analysts attribute to panic buying by both consumers and governments rather than a dire shortage of supply, has so far sparked riots in Africa and Haiti, (where 24 have died due to the unrest so far), but not Asia”

In the U.S. Costco, Wal-Mart and Wal-Mart’s Sam’s Club are limiting purchases of flour rice and cooking oil. This New York Sun article spells it out well;

“At a Costco Warehouse in Mountain View, Calif., yesterday, shoppers grew frustrated and occasionally uttered expletives as they searched in vain for the large sacks of rice they usually buy.

“Where’s the rice?” an engineer from Palo Alto, Calif., Yajun Liu, said. “You should be able to buy something like rice. This is ridiculous.”

The bustling store in the heart of Silicon Valley usually sells four or five varieties of rice to a clientele largely of Asian immigrants, but only about half a pallet of Indian-grown Basmati rice was left in stock. A 20-pound bag was selling for $15.99.

“You can’t eat this every day. It’s too heavy,” a health care executive from Palo Alto, Sharad Patel, grumbled as his son loaded two sacks of the Basmati into a shopping cart. “We only need one bag but I’m getting two in case a neighbor or a friend needs it,” the elder man said.

The Patels seemed headed for disappointment, as most Costco members were being allowed to buy only one bag. Moments earlier, a clerk dropped two sacks back on the stack after taking them from another customer who tried to exceed the one-bag cap.

“Due to the limited availability of rice, we are limiting rice purchases based on your prior purchasing history,” a sign above the dwindling supply …..”

Considering most U.S. cities only have a three day supply of food, due to supply/inventory efficiencies, (don’t you love those MBA’s) any interruption of the distribution chain could trigger an outright panic.

With diesel fuel hovering at a $4.20 per gallon average it’s only a matter of time until we hear from the truckers.

It’s a bad combination of tight supply and high prices. It could pay to be a step ahead.

The Wall Street Journal says “Load Up The Pantry”