"What Can Burn Will Burn" Fire Season Prep 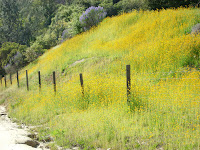 The other day I wrote about an early season vegetation fire in Big Sur and how that keyed to me what this season will offer.

I’m not the only one sensing this will be an active summer.

Check out this article (sent to FFBlog by reader Poncho!) found on SanLuisObispo.com via Los Angeles Daily News.

“Last year, fueled by the driest year on record in Los Angeles that left the region tinder-dry, massive wildfires throughout Southern California destroyed hundreds of homes and scorched more than 500,000 acres.

Then again, he added, “They are all bad.”

This year’s fire season is arriving after a wetter winter; downtown has already seen roughly 13 inches of rain since July 1.

But some experts say that has simply led to a growth in vegetation — literally more fuel for the fires. And they note that it hasn’t rained recently — and it’s going to be a hot summer.

There’s a 40 percent chance of above-normal temperatures from May through September, said Rich Thompson, a meteorologist with the National Weather Service.”