Drought and Fire, Atlanta In Spotlight

Tom Engelhardt of TomDispatch.com pens a sobering piece on the worldwide drought situation and asks questions no one else cares to.

What happens when Atlanta runs out of water? Tom points to towns in North Carolina and Tennessee that already have. The larger point he makes is what happens if the taps run dry and 5 million people have to exit town?

Firefighters, along with police and emergency medical personnel, would stay.
It’s hard to say who would have a tougher job of the three. Law enforcement will have their weapons, hospitals will have bandages but what happens when when hydrants run dry?

Tom discusses mega-fires and drought, a subject that interests me. Earlier this year we saw fires in New Jersey, and the huge conflagrations in rural Florida and Georgia. The dry conditions in Southern Europe and North Africa offered up low fuel moisture inviting disaster.

While the Greek fires burned we could see from the satellite view coastal Algeria was suffering from record wildfires. Macedonia and Albania were on fire as well. We did not hear about those fires.
The Canary Islands suffered record fires just a month before the Greek fires. Oddly at the same time fires were burning around Perth Australia in what was their winter!

I’m no climatologist and am reluctant to sign on the the global warming hype. Frankly if it were anyone but Bono and Al Gore sounding the trumpet I might be more inclined to buy into it.

There is no denying that worldwide we are seeing larger fires, larger storms. I’ve been chalking it up to better reporting and more efficient satellite imagery.

Engelhardt sees it anther way, not enough reporting. No one is connecting the dots. Connecting dots does nothing for Atlanta Georgia at this point anyway. 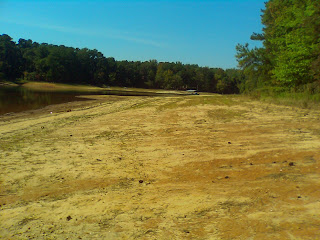 What happens if the drought in the South goes into the spring and the faucets go dry? Atlanta has some big decisions to make. At what point do they cap off hydrants, denying city water for fire suppression?
Is this even a consideration? Has a major metropolitan area in the modern era ever faced this scenario?

Twenty times the size of the Katrina evacuation, ten times the size of the recent San Diego and L.A. County fires evacuations. Would it look more like the chaos in New Orleans or the civil evacuations witnessed in California?
The Governor of Georgia held an open prayer session last week asking God for some help. It did rain a day or two after the public event but it wasn’t enough to make a dent.

I’ll be saying a prayer for the public service personnel who will man their posts come what may.

Finally a quote from Engelhardt’s post and a return to the bigger picture;

“In the meantime, there may be no trail of tears out of Atlanta; there may even be rain in the city’s near future for all any of us know; but it’s clear enough that, globally and possibly nationally, tragedy awaits….”