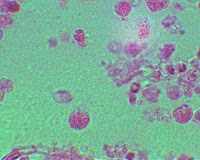 Via TV5 News Phoenix a very sad story of a boy who died from a killer ameoba found in the warm waters of Lake Havasu.

From the article:
“According to the CDC, the amoeba called Naegleria fowleri (nuh-GLEER-ee-uh FOWL’-erh-eye) killed 23 people in the United States, from 1995 to 2004. This year health officials noticed a spike with six cases — three in Florida, two in Texas and one in Arizona. The CDC knows of only several hundred cases worldwide since its discovery in Australia in the 1960s. In Arizona, David Evans said nobody knew his son, Aaron, was infected with the amoeba until after the 14-year-old died on Sept. 17. At first, the teen seemed to be suffering from nothing more than a headache. “We didn’t know,” Evans said. “And here I am: I come home and I’m burying him.” After doing more tests, doctors said Aaron probably picked up the amoeba a week before while swimming in the balmy shallows of Lake Havasu, a popular man-made lake on the Colorado River between Arizona and California….”

Are Responders, rescuers alerted to the dangers presented by this ameoba? Are municipalities advising, training, providing nose plugs etc. for water rescue. I have little doubt deep and swift water rescue teams are aware and take protective measures but what about engine companies, volunteers and responding police?

If nothing else everyone should be aware when entering warm murky waters in the course of duty.