Halo 3 Has Invaded My Front Room

My motto is as long as they get straight A’s and manage homework I feed their video game entertainment appetite, I just don’t need to understand it all.

So 10:00 am Tuesday we (mom and dad) are in a line of about 40 adults and assorted 20 somethings standing outside Game Stop to pick up our pre-ordered Halo 3 game. The line was 9 to 1 guys to women. The only women in line were moms picking the game up for their sons.

Freshman son gets home an hour before Junior son so he tore into the package, took the XBox 360 into his room and began playing on his little 12 inch tv monitor. I warned him when his older brother comes home there will be a Halo 4 battle in the house if he refuses to give it up. “No problem Dad,” he knew the consequences. 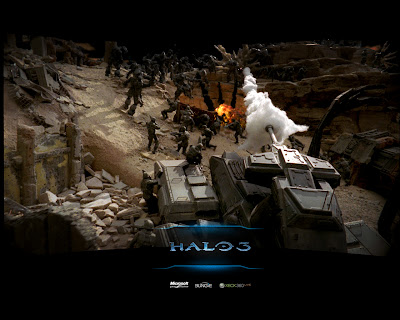 When I picked up older son from school he could not wait to get home. Days before he asked me if he could use the big screen in the living room the first few days after Halo 3 arrived. Sure I said.

Gets home, secures Xbox 360 from brother’s room and begins transforming the front room and the 58″ Mitsubishi. Halo 3 is best played with an Internet connection but for some reason the wireless network in the home doesn’t work on our XBox Live so he ran a 20 foot cable to the box from the router.

Now down to the game. He checks to see if his comrades from afar are on board, he has a headset and is barking out ideas with the friends on line.

By the way there are 661,600 other players online at the very moment he is starting.

The action begins and while I’m doing my computer stuff I am watching the action on the TV screen beyond and it’s nothing short of amazing. The graphics are near real like, damn cool, but to the kids it’s just background, they are there for one reason, one reason only, and that’s to kill.

They enter zones like forests and deserts and while I’m totally taken aback by the art of the sets the players are blind to the graphics. It’s just a setting to them. Not once did I hear “can you believe this scenery?”
By 9:00 pm the game is moved to his room to the 32 inch Sony we retired from front room duty years ago. Can’t get Internet back there from the wireless so he’s on his own but it’s no deterrent.
11:30 still at it and he’s shut down. Day one of battle is complete, the soldier sleeps.

Day two after school, “Dad, can I use the big TV until 6?” Ok I say, besides I’m liking the opening music with this pretty cool Benedictine monk chanting. Back to battling with the online friends but I’m tiring as it’s only about killing and shooting.

Years ago my kids advised me they had no intentions of becoming actual mass murderers. It’s their entertainment, they read, get A’s and figure the game play is the reward. It could be worse, they could be watching MTV so this is the lessor of evils I tell myself.

So the battle for control of the front room is on.

I admit I tried Second Life and found it kind of fun but there was too much lag and when I teleported from one world to the next I really didn’t know up from down. In fact I was stuck in space for 10 minutes once and was spinning around when someone from the ground came up and asked if I was alright. How did I know? So when I got down she (presumably a she) asked me to follow her to her place. Not understanding jack about the game I followed and she sits on a chair and says sit down. How the hell do you sit, I had no clue then she/he went on to say isn’t this a great apartment.

I left never to return.

I prefer Yahoo! chess or a poker tournament now and then.