The Angel Fire started this afternoon and has already consumed 500 acres.

According to the Imperial Valley News,“Subdivisions of Julian Being Evacuated – in face of what’s being described as a “Very Big Fire” this fir was initially spotted at 1:35 this afternoon. Fire crews and equipment have been diverted from the Big Bear Lake fire. The fire has exceeded 500 acres

Roads into Julian are closed as aerial tankers and ground crews are being rushed to the area.. A huge plume of smoke is visible throughout the region.

State Route 78 has been closed between Julian and Scissors Crossing, 20 miles to the east. “

This looks like a CDF / Cal Fire show all the way. Cal Fire has their hands full tonight. Does this combination of fires in Big Bear and now Julian remind anyone of the one-two punch of October 2003?
The big difference between then and today is the conflagrations of 2003 were Santa Ana wind driven. 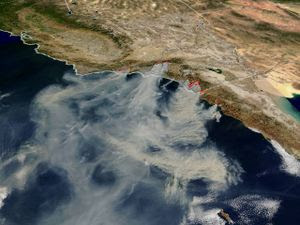