KPIX 5 News reports the Lick Fire is now over 7,000 acres. The news channel also brings news on the DC-10 Supertanker, Tanker 910 is now pre-positioned in Sacramento.

““The DC-10, known as Tanker 910, is normally based in Victorville in Southern California. The new Sacramento-area refueling and resupply station will allow the tanker to be much closer to the Lick Fire and other wild fires in Northern California, according to Cal Fire spokesman Daniel Berlant.

Tanker 910 made one drop on the Lick Fire on Monday evening and firefighters on the scene are hoping for additional drops from the behemoth.

“It drops about 10,000 gallons of slurry,” Hoyt said. “It’ll lay down a large swath of slurry that’s very effective, especially in structure protection.’‘”

In other Lick Fire news, the Mt Hamilton webcam (Hamcam) is back up and delivering more spectacular images of the fire currently burning downwind from the telescopes at the massive Lick Observatory complex. This indicates to me CDF/Cal Fire is kicking some butt in some very tough terrain. More when the incident command post’s their evening report. 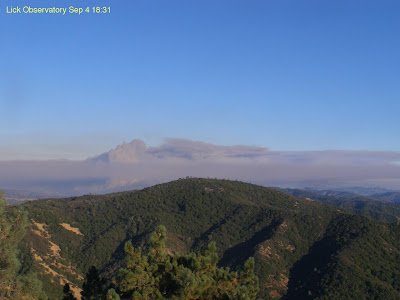