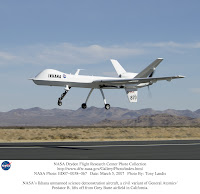 Ikhana is the name of NASA’a unmanned aircraft put in use last week on the Zaca Fire.

“A Predator B unmanned aircraft system has joined the inventory of research aircraft at NASA’s Dryden Flight Research Center, Edwards, Calif. Built by General Atomics Aeronautical Systems Inc. of San Diego, NASA took possession of the aircraft during the fall of 2006. The aircraft has been given the Choctaw Nation name “Ikhana”(pronounced ee-kah-nah), which means intelligent.

Designed for long-endurance, high-altitude flight, Ikhana will be flown primarily on Earth science missions under the Earth Science Capability Demonstrations project at NASA Dryden. It will also be used for advanced aircraft systems research and technology development.” 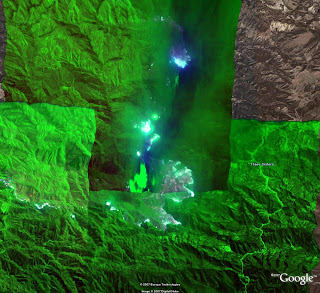 Images from NASA (links above and below)

NASA issued this press release and within claim;

““The images from the flight demonstrated that this technology has a future in helping us fight wild land fires,” stated Zaca Incident Commander Mike Dietrich. “We could see little on the ground since the fire was generating a lot of smoke and burning in a very remote and inaccessible area. This technology captured images through the smoke and provided real time information on what the fire was doing,” said Dietrich. NASA’s Ikhana, a Predator B remotely piloted aircraft adapted for civil missions, is flying its first operational effort during a series of four or five missions over the western states. Its sensor payload is collecting detailed thermal-infrared imagery of wildfires and is demonstrating the ability of unmanned aircraft systems to collect data continuously for 12 to 24 hours. The second flight in the series, a mission that will take Ikhana over Idaho and last an estimated 20 hours, is scheduled for Thursday, Aug. 23.”

It honestly beats me how Ikhana can house a camera any better than a human piloted aircraft. At least with a drone no pilot is in danger.