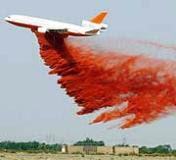 This article describes the current status of this all important firefighting tool.

“The plane, which has shown to be effective fighting large wildland fires, encountered a mishap while fighting the White Fire near Tehachapi on Monday.

After hitting severe turbulence, it descended rapidly but the crew was able to recover after hitting some trees by accelerating the plane.

The Forest Service has refused to certify the plane over concerns about the number of hours already logged on the 31-year-old DC-10, said Mark Rey, a Department of Agriculture undersecretary.

Victorville Councilman Bob Hunter said he hoped the plane would be back in action soon. “That plane really presents a critical advantage for CAL FIRE, and hopefully will be for the Forest Service soon.”

The state has contracted with the plane’s owner, 10 Tanker Air Carrier at Southern California Logistics Airport in Victorville, for exclusive use of Tanker 910 through the 2009 fire season at a cost of $5 million per year. “