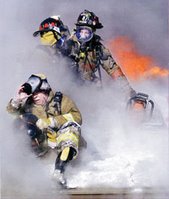 “Once a day on average in this country, someone dies when fire fighters arrive too late, an investigation of fire response times by the Globe has found. America’s fire departments are giving fire a longer headstart, arriving later each year, especially in the suburbs around Boston, Atlanta and other cities. Growth is brisk but fire staffing has been cut.”

“This story, about a fire that started in an abandoned house and spread to eventually destroy three houses and damage two, focuses on the 100 Jacksonville fire fighters who reported to the scene, several of whom were injured.”